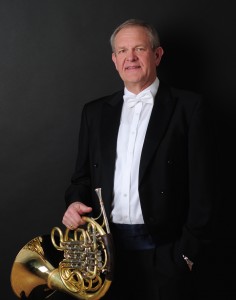 Ab Koster was born in The Hague, Holland as the son of a Dutch hornist. He completed his studies at the Royal Conservatoire in his hometown with the honor of “Prix d’Exellence”. He then continued his studies at the Folkwang Universität der Künste in Essen with Hermann Baumann, who named him one of the “leading hornist of his generation”.

Starting in 1977, Ab Koster held the position of principal horn in the NDR-Sinfonieorchester in Hamburg, Germany until 1990. In order to accept the many invitations as a soloist and chamber musician, he left the orchestra in 1990. He exhibits his excellent soloistic mastery not only on the modern valved horn but also on the historical natural horn. The many years of collaberation with Jean-Pierre Rampal, Gustav Leonhardt, and Frans Brüggen (“Orchestra of the 18. Century”) as well as many solo performances, records, radio and TV recordings in various countries earned him an outstanding international reputation. Concert tours have led him to almost all countries in Northern, Western, and Eastern Europe as well as in the USA, Canada, Japan, Australia, and Taiwan.

For years, Ab Koster belongs to the small circle of soloists who are sought after world-wide, on the natural horn as well as on the valved horn. In addition to this, he holds a professorship at the Hochschule für Musik und Theater in Hamburg. His interpretation of the concertos by Mozart and Strauss are particularly celebrated all over the world.